How to test and prove fire door performance | Warringtonfire

How to test and prove fire door performance

As we approach this year’s Fire Door Safety Week, from 20–26 September, questions about how to test and prove fire door performance start to be asked more regularly.

Fire resisting doors are crucial to life and building safety and can significantly mitigate the risk of flame and smoke spread in a fire, providing that the door design has been appropriately tested, proven as capable of achieving the required level of fire resistance performance in standardised test conditions, and is correctly specified.

Below we outline some of the key considerations when testing and specifying fire doors.

Before deciding how to test and prove fire door performance, it is first important to understand the terminology around fire doors, as this could affect the standard a product is tested to and what performance results are required. The following definitions are taken from EN 12519: 2018 & LC: 2019; Windows and pedestrian doors – terminology.

Do I need to CE mark or UKCA mark my fire doors?

At present, door assemblies and internal doorsets, as defined above, do not have a relevant harmonised or designated standard and cannot therefore be CE or UKCA marked. However, the standard for external pedestrian doorsets (EN 14351-1) and fire rated pedestrian doorsets (EN 16034) are both harmonised and designated, which means it is a requirement to CE and/or UKCA and/or CE + UK(NI) mark these types of doorsets for placing on the market, as applicable.

The new UKCA mark will eventually replace the European CE mark within Great Britain but a transition period where the CE mark will still be accepted has now been extended until 1 January 2023. From that date, only the UKCA mark will be accepted on doorsets that are covered by a designated standard, and are being placed on the market within Great Britain. Europe will still require CE marking on doorsets that are covered by harmonised product standards, as will Northern Ireland (other than those products that are only for use within Northern Ireland, which will need to be CE + UK(NI) marked).

When creating a program to test and prove fire door performance, it is important to develop end goal objectives. These should take into consideration the product range, and whether fire doors will also have acoustic requirements, glazing, various types of finish, etc., and what the overall performance needs are.

Working with a company like Warringtonfire, one of the world’s foremost fire testing laboratories with over 40 years of experience testing and researching products used within the construction industry, will ensure that your test program meets all the requirements of your end goal objectives. The team of engaged experts will confirm the standard requirements and decide what test methods and test evidence is needed to meet your stated end goal objectives, in terms of product performance.

Warringtonfire will also manage the test process at a highly technical and competent level, using a specially configured furnace with sophisticated control systems, programmed to meet the time-temperature and pressure conditions outlined in the relevant test standard. Experts will install the product following the manufacturer’s specified requirements, and our technical officers carry out a full pre-test survey to independently verify the specimen details for the test report, which can be used alongside a separate sampling report for the purpose of third party certification and/or CE and/or UKCA marking.

The team can also provide documents that extend the scope of application of the testing to cover various design options, which are known as assessments or Extended Application reports (EXAPs). The assessment process is based on test evidence and relevant expertise and will provide an opinion on the potential performance of the design variations to the standard it was tested to. The EXAP process is rule based and uses European EXAP standards to prepare a document that gives an extension to the tested scope, which can be used to provide a formal classification using the EN 13501-2 standard. The assessment process is typically used for national application (and other jurisdictions accepting that approach) and the EXAP process is used within CE and UKCA marking, to provide a formal classification that can ultimately be used by the manufacturer to draw up a declaration of performance, when CE or UKCA marking their doorset. It is possible to combine the results from multiple tests to provide a wider extension to scope using either method.

Third party certification, such as the Certifire scheme operated by Warringtonfire, are globally recognized marks of performance, reliability, quality, and traceability.

The Certifire scheme helps ensure the correct installation and performance of fire doors, acting as an investment now that will help to reduce risk and avoid costly issues in future.

Third party certification schemes often offer a higher level of assurance than the minimum required for CE or UKCA marking, however, if the product is covered by a harmonised or designated standard, the schemes can be used in addition to, but cannot conflict with, the requirement to CE or UKCA mark the product.

For more information on fire door testing and certification, contact us. 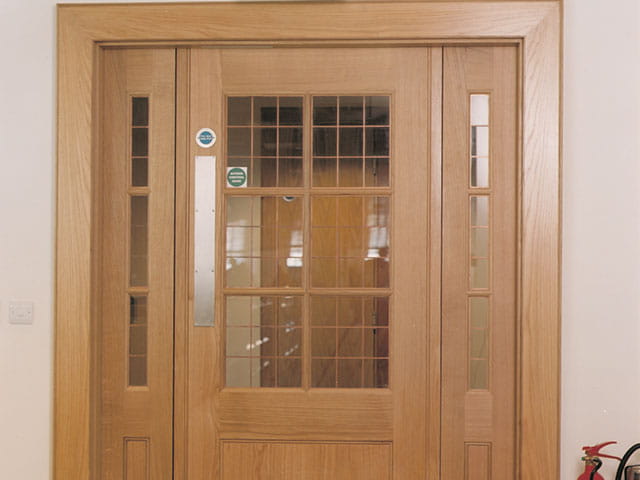 Why choose Warringtonfire to test and prove fire door performance?

Warringtonfire offers independent, accredited testing services to British, European and international standards, as well as UKCA marking and third-party certification. A global leader in fire door testing, the Warringtonfire team can discuss your products and projects and how testing and certification can lead to market access, new business, and long-term stability.