Why do I need smoke curtain testing?

Warringtonfire can test your smoke curtain for fire resistance to various standards, including BS and EN.

It is a fact that inhalation of gas, smoke and toxic fumes are still the leading cause of injury and death during a fire. Therefore, including smoke curtains in a building design is important to life safety; it is a requirement of building regulations that escape routes and egress are to be protected. Any opening that does not utilise passive fire products, such as fire doors, can pose a risk of smoke spread, and the activation of smoke and fire curtains can be used to protect life during an evacuation.

With effective certification and testing, a smoke curtain can be designed to withstand the heat from a fire for a specific period to keep the all-important escape routes clear of toxic fumes and gases that can cause so much damage to life during a critical event.

What type of testing will my smoke curtain require?

The testing your smoke curtain is subjected to is dependent on the specific type of curtain and where it will be used in a completed building.

Compliance with this standard would typically involve subjecting representative specimens of the smoke curtain to tests to demonstrate its reliability, response time, deployment, fire performance and smoke leakage performance.

What is a smoke curtain?

Classed as an Active Fire Protection Product (which means they don’t activate unless there is a fire), essentially, a smoke curtain is a barrier that is invisible during the daily running of a business but creates new walls when a critical event occurs.

Where products such as fire doors are always evident, smoke curtains are often hidden until needed. As hot smoke rises, smoke curtains don’t need to cover from floor to ceiling. They make a tunnel-like effect to channel smoke, keeping the temperature high above head height to draw smoke away from egress and protecting evacuation routes, preventing smoke movement that hinders escape. They can often work in conjunction with a building’s ventilation system, directing the smoke towards an extraction point to help clear the toxic fumes as much as possible.

Similar in design to a roller shutter door, smoke curtains comprise reinforced fabric and coatings for fire resistance and include control systems which allow the curtain to deploy and create its smoke tunnel effect during a critical event.

Smoke curtains are distinct from both fire curtains (which will have some degree of smoke control) and fire-and-smoke curtains, which include specific seals that undergo independent testing in addition to their main fire curtain components.

Whereas fire-and-smoke curtains deploy to create a barrier to compartmentalise a building during a critical event, a smoke curtain exists only to channel the smoke away from the most populated areas.

How do smoke curtains work?

The attractive design is a vital part of most building construction, and fire doors and compartmentation don’t work in some spaces, but the need for fire control products exists for all buildings.

Smoke and fire curtains work well as an active product in these situations as they are invisibly retracted until a control system is activated. Once the system is activated, the smoke curtain will lower and prevent the movement of smoke outside of the controlled area.

The smoke or fire curtain is stored discretely above a ceiling, lobby or doorway and then once triggered, it will fall vertically, protecting the intended space. Once activated, it acts as a physical barrier between the fire and/or smoke and the escape routes.

The benefit to these curtains is that they can be installed in many different locations, including in open-plan spaces or heritage buildings where you aren’t able to change the fabric of the building too much, but fire safety is still crucial.

Smoke curtains can serve many purposes, but the performance criteria are as follows:

As smoke curtain barriers are hidden until needed, they can be suitable for a variety of spaces, including:

To find out more about how Warringtonfire can help you with your smoke curtain system’s testing and certification, please contact us at the below laboratory. 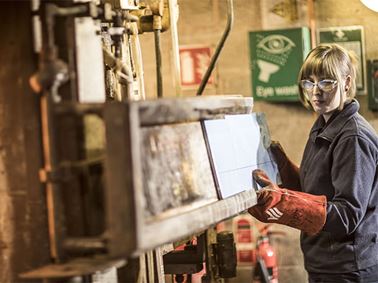 Find out how we help our customers to evaluate ignition, flame spread, heat release, smoke generation and toxicity for their materials, products and systems.